I think I must have spent at least 5,000 hours and 50,000 quarters in arcades playing video games when I was growing up. These days, the only games I get to play are on my home consoles or my iPad. Still, I like things which remind me of the heyday of arcade gaming, like this arcade cabinet inspired piggy bank. 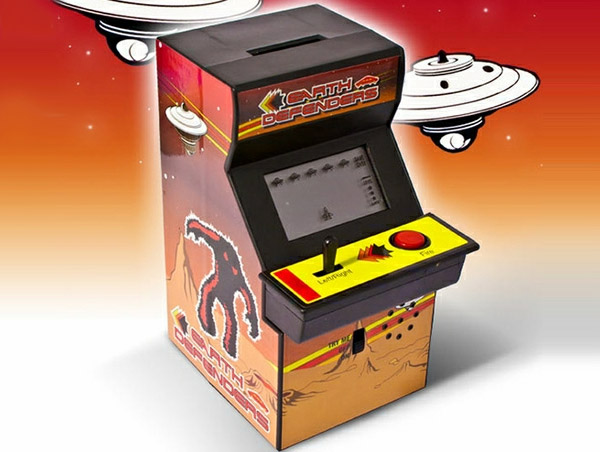 The graphics on the side and front of the tiny cabinet are reminiscent of the ones on Space Invaders, and it’s got a little joystick and fire button for playing its rudimentary Invaders knock-off (called Earth Defenders) on its LCD screen. Each time you drop a coin in the bank (yes it can even be a penny) you’ll get 2 minutes of gameplay. As time ticks down, you’ll get a warning when you only have 30 seconds left so you can put another coin in the bank.

Sure, it’s not as cool looking as that official Space Invaders piggy bank from a few years back, but at $19.95 (USD), it’s also way cheaper than that one. You can grab the Arcade Piggy Bank over at Kleargear.