Put a Robotic Surrogate on Your Shoulder

If you want to share the world around you with your friends, but your friends aren’t there with you, then just put your friend on your shoulder – thanks to a robot surrogate. Researchers at Yamagata University are working to build a miniature humanoid that could one day let a robotic version of your friends sit on your shoulder and point at things. Sounds like fun. Like a modern day Pirate, with his parrot replaced with a robot. 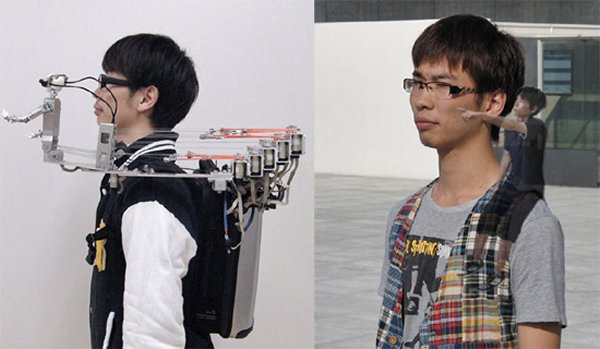 The project is called MH-2, and it still has a long way to go before it becomes a reality. The goal is to provide a tool for seamless telepresence, giving a remote viewer an immersive experience and a robot body to interact naturally with the world. While the robot sits on your shoulder and sees what you see, your friend sits inside an immersive 3D environment, controlling the robot with a motion-tracking system.

Right no, MH-2 is simply a small robotic head and torso connected to 22 actuators and a backpack. The backpack holds all the computer hardware and power supply for the MH-2. The robot has dual cameras used for sterescopic 3D imaging mounted on the head. The hands and arms are movable, even the chest plate moves to simulate breathing.

So one day in the future you will never have to be lonely again. You and your shoulder buddy will get along just fine. Your shoulder might hurt though.