Ubi Interactive Uses Kinect to Turn a Wall into a Touchscreen

I bet a bunch of us have looked at the touchscreen of a smartphone or tablet before and wished it was the size of a wall for playing games or using other apps. A company called Ubi Interactive is showing off a system that uses the Microsoft Kinect to turn any surface into a touchscreen device that supports gestures. The system works with any standard projector. 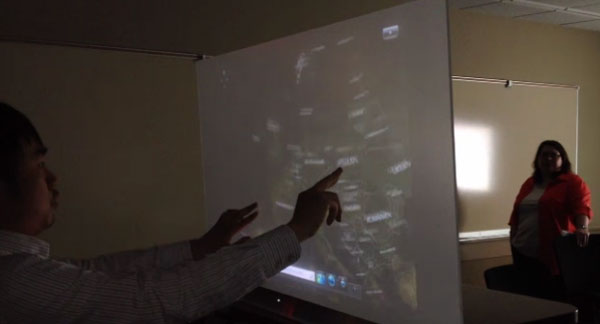 The system can be used for playing games such as Angry Birds or for worker types giving PowerPoint presentations where zooming in on certain aspects would be advantageous. The projector throws its image onto a piece of frosted glass hanging in the center of an office. The Kinect sensor is placed on the other side of the glass. The Kinect sensor shoots data over to the same Windows-based computer that controls the projector. The sensor is able to read the gestures the user makes and translate those into something the computer can understand, such as zooming in and out and more.

Ubi hopes to market their software package for around $500 so individuals, businesses and educational institutions can use it for their own custom applications. The only requirements are a Kinect, a projector, a Windows PC and a surface to project on to. While this isn’t the first example of a large projection touchscreen, it is cool that Ubi was able to put it together with inexpensive, off-the-shelf parts.

You can see a video demo of the Ubi system in action over on Wired UK.