Of all the science fiction/horror films out there, the Alien franchise has always been my favorite. I’ve always particularly like the original Alien film and the 1986 follow-up Aliens. If you’re a fan of that flick, you probably already know that a video game called Aliens: Colonial Marines is coming on February 12, 2013. 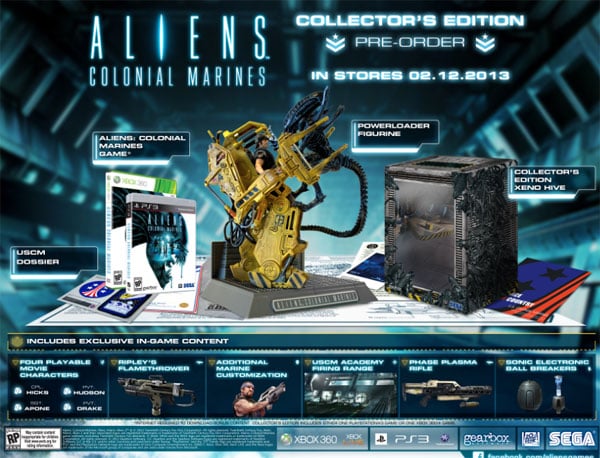 The game is being published by Sega in cooperation with Fox Consumer Products. The two companies are offering up some details on the pre-order version of the video game that will be GameStop exclusive. The North American pre-order version will have some exclusive content for multiplayer use including four playable characters from the movie. Those characters include Private Hudson, Corporal Hicks, Private Drake and Sergeant Apone.

Those that pre-order will also get additional character customization options and access to Ripley’s flamethrower. The $99.99 collector’s edition of the video game also gets some cool extras, including a high-quality resin power loader figurine and a limited-edition Xeno Hive box. Exclusive multiple player weapons include the Phase Plasma Rifle, and Sonic Electronic Ball Breakers. This version of the game also gets an exclusive level called USCM Academy Firing Range along with other content.