It’s no secret that the Space Shuttle fleet has been retired and is no longer carrying astronauts and cargo into space. The Shuttles will spend the remainder of their days on display for fans of spaceflight to look at. One of the Space Shuttles making its way to its final resting place is the Enterprise – the one shuttle in the fleet that never actually went into space. 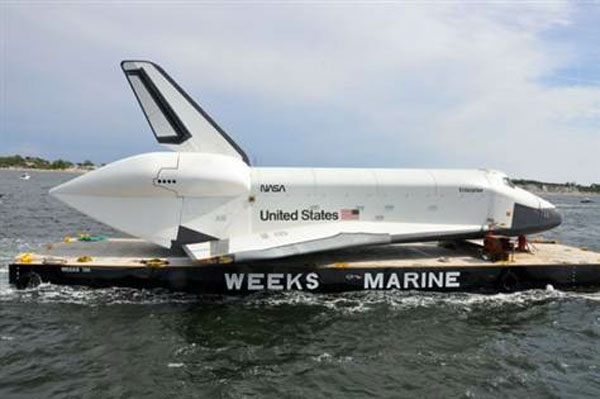 Enterprise was used for approach and landing tests in the late 1970s. Enterprise was placed on a barge and sent on its way to its final location on board the NYC Intrepid Sea, Air, and Space Museum. During the barge trip, Enterprise had a bit of an accident when one of its wingtips grazed a bridge support. You can see the yellowish damage in the photo above on the shuttles right wing.

The shuttle had to navigate several particularly tricky areas on its trip. One of the areas was the Channel Subway Bridge and the others included the Cross Bay Veterans Memorial, Gil Hodges Memorial, and Verrazano-Narrows bridges. The damage happened on a railroad bridge where the wingtips only had a few feet to spare on each side to make passage, a gust of wind pushed the shuttle into the bridge causing what appears to be cosmetic damage at this point to foam that covers the outside of the wings.