Star Wars 1313 Will Make Your Lightsaber Stand Up

Apparently, I’m not geeky enough to know that Coruscant in the Star Wars universe is made in a bunch of layers going down deeper and deeper into the planet. The new videogame Star Wars 1313 gets its name because it takes place on layer 1313 where the underworld reigns. The gritty, M-rated video game will see players playing as a bounty hunter going deep inside of Coruscant. 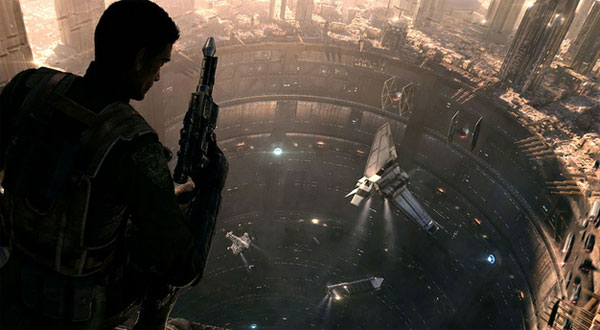 With E3 2012 going on right now, the first in game footage of Star Wars 1313 has been shown, and this game looks awesome. I’m betting you’ll need to upgrade your video card to be able to play this game with all the features enabled, because the graphics look fantastic. It doesn’t hurt that the developers from LucasArts have had help from ILM and Skywalker Sound. We still don’t know all the details of the video game, but you want to check out the footage below.

The cut scene is supposed to be actual rendered footage from the game demo, and after the cut-scene is actual player-controlled gameplay. I think this could be the hottest game at E3 and I’m looking forward to playing it on my PC. There’s no word yet on if or when the game will come to consoles.