I’ve been telling my kids for a week now that last night we were going watch Venus creep across the face of the Sun. Naturally, when the time came, it was cloudy and we couldn’t see the sun much less get a glimpse of the last transit of Venus for the next 100 years. If you were unable to view the Venus transit or just forgot about it this video is much better than the real thing was for most of us. 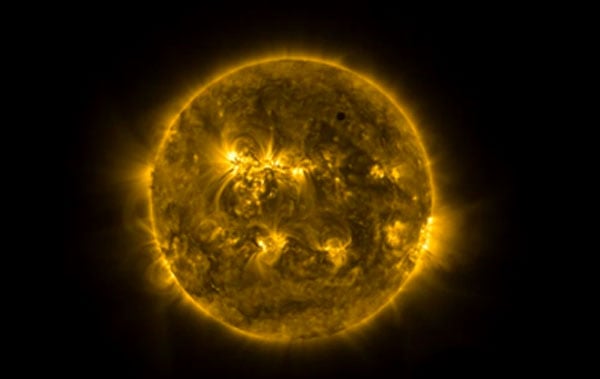 A tiny ESA “microsatellite” called Proba-2 that resides in low Earth orbit recorded the entire, approximately 7 hour, transit of Venus across the face of the Sun. Video like this never ceases to amaze me. Most images we see of the sun make it seem like silent and placid orange blob. The truth is the Sun is constantly active shooting streams of radiation and superheated materials into space.

The wobble in the time-lapse video is attributed to the slight up-and-down motion of the Proba-2 satellite as it orbits the Earth and the vast distance between the satellite and the Sun. Scientists say to pay attention to the point when Venus first appears to touch the limb of the solar disk. The solar brightness dips for a second, which is attributed to the thick atmosphere around Venus.