The Hostage Trials: Play Mini Games or Your Friend Dies

“Gamification” has become a buzzword in the past few years, referring to the incorporation of levels, achievements and other congratulatory statistical landmarks in real-life activities to encourage participation. Don’t worry, I too, did not understand what I just said. But let’s rub our chins and nod sagely as we ponder this interesting pitch for a game that I think is influenced by gamification. It’s a gamified game. 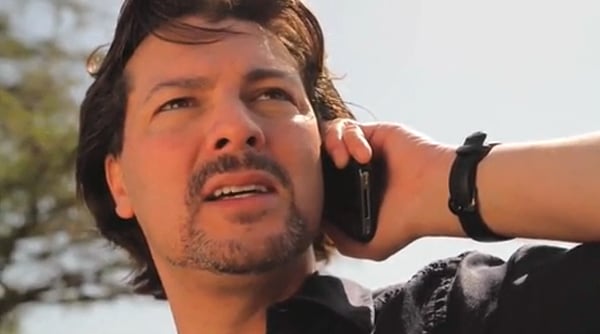 Indie developer Gnarly Tooth is currently pitching a game called The Hostage Trials, a “real time mobile adventure.” For $3 you get to have a villain call you on your mobile device at a random time to insult you and your life and finally threaten to kill one of your friends if you refuse to do his bidding. The villain by the way is voiced by David Hayter, who is also the voice of Solid Snake & Big Boss, so it’s all good. Just think about it: how much would you pay to talk to Solid Snake? This is going to be him calling you! And you can ignore him!

So what kind of vile, humiliating and stressful actions will you be forced to take to please the Hayter? According to the Kickstarter project the mini-games include “walking a certain distance in a certain amount of time”, “changing your elevation” and calling a number. Sounds like the villain should have been Psycho Mantis.

There’s other potentially unique activities though, like “helping the villain launder money” or “remotely setting off an alarm.” It could be interesting. It could be illegal. The friend that you choose to be the hostage will also have tasks and challenges too.

If you’re sold on the concept, a pledge of at least $3 (USD) on its Kickstarter fundraiser gets you the game on either iOS or Android if and when it comes out. It sounds like you’ll have to suspend your disbelief a great height to fall for this game, but it could be really fun. At least it’s not being released by a greedy publisher. Imagine being asked by the villain to like their Facebook page while eating Doritos and wearing nothing but American Apparel underwear. Or your friend dies.