Rugbeer Vending Machine Must Be Tackled to Land a Brewski

I’m sure we’ve all had put beat down on a vending machine at one point in our lives for not delivering our drink or snack after you’ve paid. Something about shaking a vending machine seems to get frustration out, and sometimes gets the product (or two) out too. Now, a beer company has developed a new vending machine for rugby fans in Argentina that they actually want you to tackle. 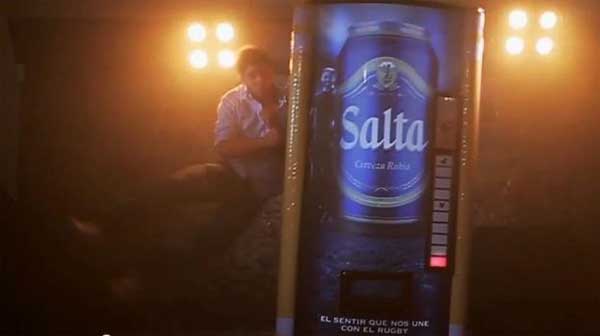 It appears the machine is padded on the sides and the only way to get it to dispense you rear is to tackle the machine. I think by tackle, they likely mean hit rather than actually take the machine all the way down NFL style. You wouldn’t want to be crushed by the machine falling on you, of course. The special beer machine was designed by creative agency Ogilvy for a beer called Cerveza Salta.

The company says that bars where the special vending machine is installed have seen an increase in purchases of beer by 25%. Something this awesome would never make it past safety regulations in the United States. And get this, a meter on the front of the machine is actually called the “pussy meter” and measures the strength of your hit. If you hit it like a puss, no beer for you.

[via PSFK via DigitalTrends]