I’m not sure why we need robots that can swim like humans, but here we have one, and it’s named “Swumanoid.” Is there not enough danger at sea? Do we need humanoid robots swimming around ready to drag us under? I always thought the water would be one safe place after robots took over. Once again, I was wrong. 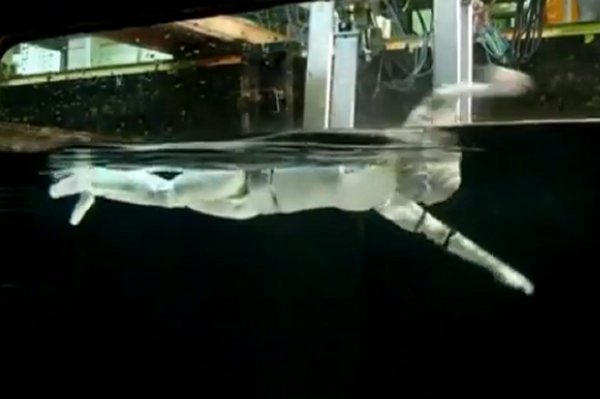 This guy swims just like a human. Well, just like an awkward, slowly-swimming human anyway. It comes from Chung Changhyun and Motomu Nakashima at the Tokyo Institute of Technology. Impressively, the robot can mimic a swimmer’s whole-body motion while measuring water resistance.

To create the robot, the researchers first performed a 3D body scan of a real person. A 1/2 scale model was built using 3D printed parts. The robot was then outfitted with 20 waterproof motors, and then programmed with the necessary motions to reproduce realistic crawl, breaststroke, backstroke, and butterfly. Swumanoid can even doggy paddle and tread water.

While it’s cool, it’s still pretty creepy to think of this thing in the water, coming up behind you. Hopefully if it ever gets away from the lab, it gets eaten by a shark.