An AT-AT Walker Built for Two (The Empire Strikes Bike)

Is that an AT-AT walker riding a bike? Times must be tough for the Empire. Maybe AT-AT walkers have run out of energy since the battle on Hoth. Actually this is a people powered AT-AT. Fully articulated by pedal-power. 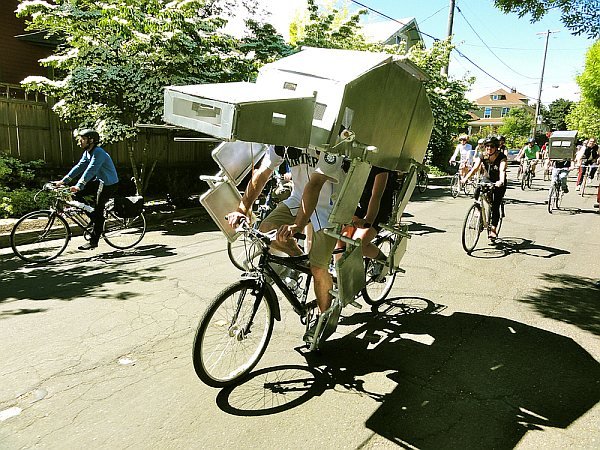 There’s also a video of the AT-AT bikers in action at the Star Wars vs. Star Trek Pedalpalooza 2012 event in Portland that took place last weekend. If you’ve never heard of Pedalpalooza, it is 3+ weeks of bicycling, with over 293 events this year.

It sounds like fun, but looks awfully difficult to ride. If you want to try it for yourself, you just need a bicycle built for two and an AT-AT costume that you both can wear. I’m sure you’ve got both of those lying around, right? I’d love see a ton of these riding down the street toward other bicyclists wearing turrets and Snow Speeders.