If you woke up one morning and realized the zombie apocalypse was here, what vehicle would you want to fight off the hordes? I think I want something with a lot of payload capacity for all the weapons, Doritos, and Dr. Pepper I’d need to survive. I would at least want something big and rugged that could survive being set upon by the horde. One vehicle that would never come to my mind to fight the zombie apocalypse would be a Hyundai. 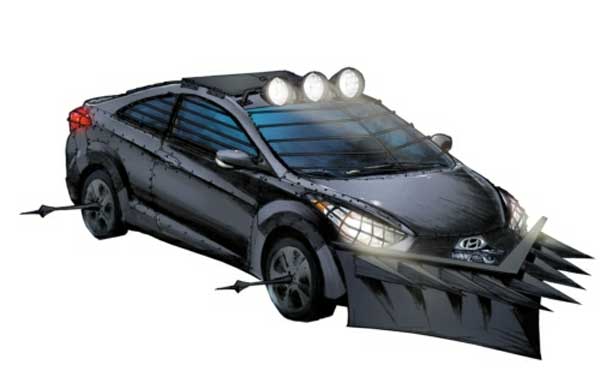 However, The Walking Dead Creator Robert Kirkman has created a cool Hyundai Elantra Coupe that I could certainly see being used to kill zombies. Apparently, the actual vehicle will be shown off on the Comic-Con show floor at the Future US booth in July, and I’m looking forward to seeing what it looks like.

The car appears to have riveted-on metal plates to protect it from zombies along with spinning wheel spikes to sever legs and a zombie plow with spikes in front. It’s also got plenty of light for those nighttime zombie killing sprees and roof mounted escape panels. I still think you’d be better off with something that can could on or off-road. I vote for a zombie fighting Hummer. Or maybe one of these.