Ringbow Wearable D-Pad Now on Kickstarter: One Ring to Rule All Mobile Devices

If you liked the Ringbow concept device, you’ll be glad to know that you now have the chance to help turn it into a real product and even be one of the first to own a Ringbow if and when it comes out. If you didn’t like the Ringbow, I’m sorry. I’m not aware of any Kickstarter projects to stop the Ringbow from being made. 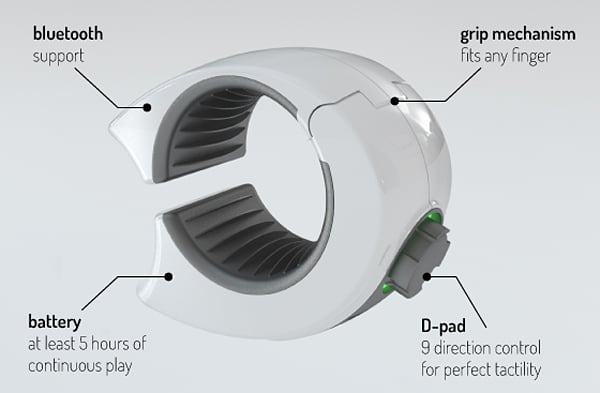 In case you’re not familiar with the Ringbow, it’s a ring-shaped device with a dual-purpose directional pad/button that’s meant to enhance touchscreen devices. Aside from acting as a physical controller for games, the Ringbow can also be used to control a mobile device from a distance. For example, it can be used to answer a call remotely or control music playback. It can also act as a modifier to make it faster to interact with apps, similar to Shift and Ctrl commands on desktop programs.

Sir, the camera is on your left, but more importantly I’m not entirely sold on Ringbow yet. As we previously noted, developers have to add support in their apps for the device, making it one among a growing number of mobile device controllers with limited app support. But if you’re already throwing money at the screen head to Kickstarter to back the project. Pledge at least $45 (USD) to reserve your Ringbow, again if and when it sees production.