Ancient Turtles Died Getting Their Freak on

Bowww-chica-boww-bowww. Scientists discovered fossils this month of ancient turtles that shows several mating pairs that went out in epic style. I imagine it went down like this, girl turtle shouts “OMG we are sinking!” Guy turtle says, “So what?” Scientists discovered the fossilized remains of nine mating pairs of an extinct turtle called Allaeochelys crassesculpta. 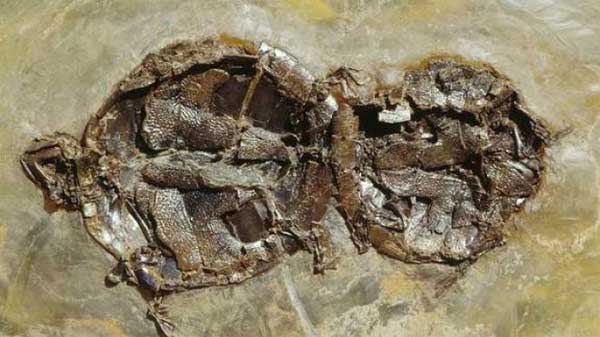 These turtles died in the act of procreating and were discovered in the Messel Pit in Germany. This particular location was once the volcanic crater lake in a wet tropical environment. The location was used as a mine in the past for the oil in the shale located there. However, it has since become one of the most important sites in the world for understanding what the environment was like in the Eocene era between approximately 56 million and 34 million years ago.

Other fossils discovered in the area include early horses, reptiles, primates, honeybees, giant ants, birds, and bats. The scientists speculate that the copulating 47 million-year-old turtles died when they sank into the poisonous depths of the lake. This is scientifically important because no vertebrates have been found in a mating state before.