Like most gamers that grew up in the 80s, I’m a big fan of Super Mario Bros. This is one of the most iconic games from my youth, right up there along with Pac-Man. In tribute to Mario, an artist named Chris Carlson has created a truly epic piece of 3D chalk artwork. 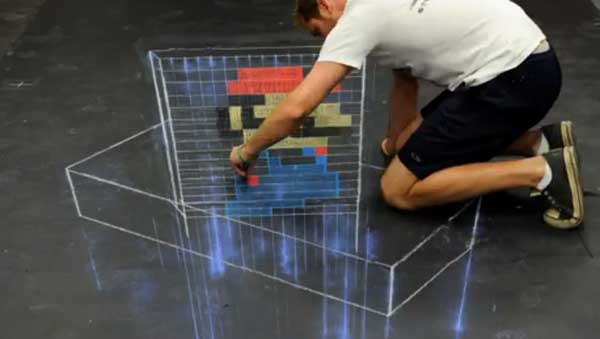 It’s amazing to me that the image he draws is made with plain old chalk, yet looks completely three-dimensional. Carlson and his friend shot a time-lapse video to give you an idea how he creates the 3D art. It’s very impressive how he pulls it off starting with a flat perspective grid used to draw all the blocks for the pixel art Mario. He also uses a large metal ruler and copious amounts of chalk.

You need to watch the video for yourself to see how he pulls it off.  The video even has the familiar Super Mario theme song in the background, ensuring that it will be stuck in your head all day. I wonder how long it took Chris to create the image – it’s hard to tell since it’s a time-lapse video.