It has been about a year since Hasbro launched its own LEGO-style building sets under the name brand KRE-O. The first of those kits Hasbro offered were Transformers themed. The toy maker is back with a new line of KRE-O building sets that are officially licensed Star Trek kits, based on the J.J. Abrams-helmed Trek movie series. 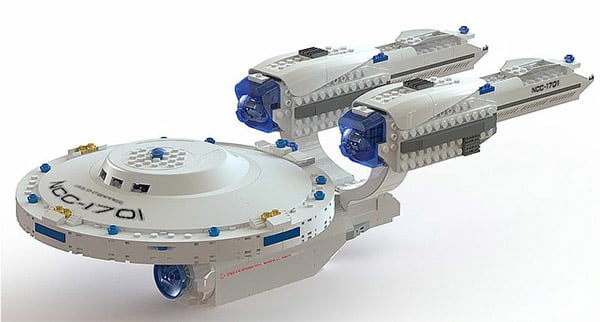 There will be multiple building sets to be unveiled a preview night starting on July 11 at San Diego Comic-Con 2012. The first of the sets to be unveiled is a U.S.S. Enterprise kit. Some the details on this kit are missing such as exactly how big it is and how many parts it has, but it does look pretty good. The company will also offer special “KREON” figures of Trek characters.

KREON figures are the KRE-O versions of LEGO minifigs. Three of the special figures will include Kirk, Spock, and Bones. There’s no word on when the sets will be available for purchase or how much they will cost.