It must be pretty cool to be Ken Block. The guy gets to drive cars for a living and is a world-class hoonster. In fact, “Ken Block” translates in the Latin to Hoonicus Maximus, or at least it should. If you’ve ever watched Block’s Gymkhana videos before, you will definitely want to see the latest that was released this week. 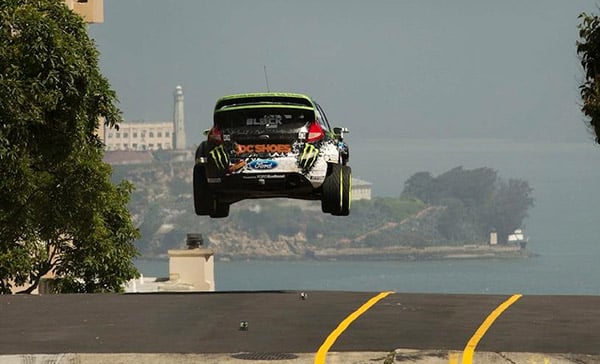 The latest video is Gymkhana Five, and this time out Block and his insanely fast Ford Fiesta (possibly the world’s only cool Fiesta) are up to some insane stunt driving in San Francisco. Block was able to get closed access to a bunch of the famous San Francisco city streets, including a suspension bridge, so he could drift and tear the place up.

It’s awesome to see him jump that Fiesta over some of the hilly streets in San Francisco. Be sure and watch the hood on that jump, it appears that the landing ripped the front end out of the car. I bet they needed a new car after that scene or at least had to stop for repairs. Apparently, the movie was pieced together from different scenes shot on different days, but it’s still incredibly awesome. I think my biggest car guy wish would be some hoon lessons from Block.