For this epic LEGO project, a team of people from Rolls-Royce the built an incredible 675-pound replica of the Rolls-Royce Trent 1000 jet engine. The LEGO jet engine you see here took 152,455 bricks to build and is accurate all the way from the fins of the intake fan to the combustion chambers were jet fuel would be burned. The LEGO engine is nearly 5 feet long making it 4 feet shy of the real thing. 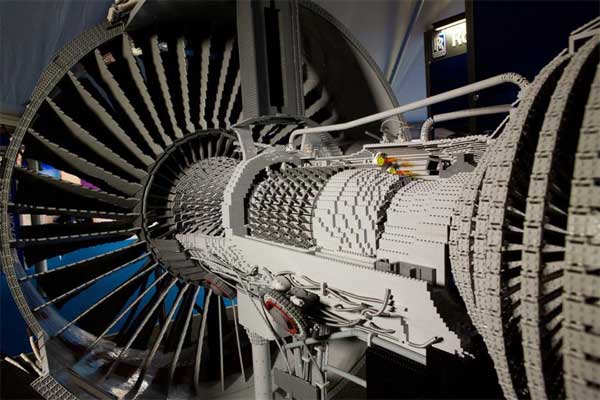 The actual Trent 1000 engine, which is used on the new Boeing 787 Dreamliner, is 9 feet long and weighs about 12,710 pounds. The entire LEGO engine consists of 160 separate engine parts and took a team of four people about eight weeks to build. The entire project is amazing, and the builders made the individual components from actual CAD drawings of the real parts.

The blades on the intake fan are so thin it’s hard to imagine them staying together. Rolls-Royce Chief Scientific Officer Paul Stein said the company built the engine to inspire the younger generation. “We are very pleased some of our own graduates and apprentices have contributed to building it, ensuring it is as realistic as possible,” Stein said in a statement. “We hope that this representation of our technology will help to enthuse and inspire the potential scientists and engineers of the future about the career opportunities they could pursue.”

Or maybe they just did it because it’s fun to play with LEGO bricks.