While I particularly like the look and programmability of the L8 SmartLight, it might be a bit showy and overkill for many needs. If you’re looking for a simpler way to indicate activity on your computer or the internet, you might want to check out this little gadget instead. 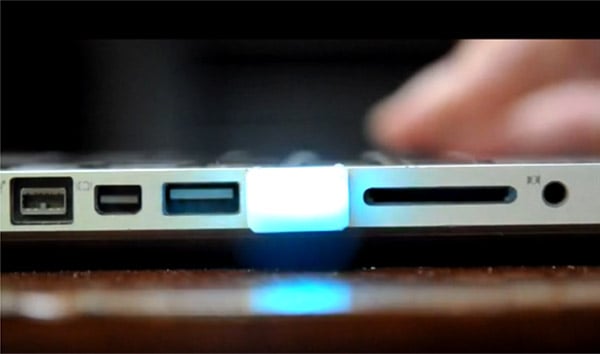 It’s called the blink(1), and it’s a tiny programmable RGB LED with a USB connector on the end of it. Just plug one into a spare USB port, and you can program it to blink or glow in any color based on software triggers from your computer. For instance, you can have it glow when you have a new email, or maybe when a friend signs on to Skype. It can be used to indicate pretty much anything you’d like. And if you’ve got more than a single available USB port, you can go to town with multiple blink(1)s.

The blink(1) will ship with apps for Mac OS X, Windows and Linux, and since its designed to be Open Source, you’ll be able to custom program it for other applications as well – and there are C and Java APIs for low-level access. Each tiny blink(1) sells for $30(USD), or you can pick up a two-pack for $55 over on Kickstarter. The project has already surpassed its funding goal, so it’ll definitely go into production.