Doctor Evil always had modest dreams, all he really wanted were sharks with frickin’ laser beams on their heads. But not ones to settle for something so lame, a group of researchers at the National Ignition Facility inside the Lawrence Livermore National Laboratory has set a record by creating the most powerful laser beam ever. 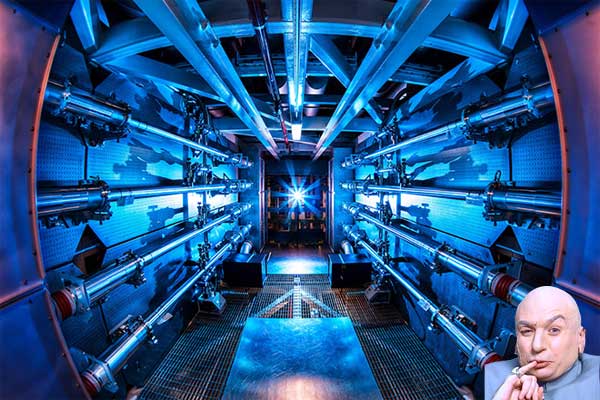 The scientists are trying to create a laser powerful enough to ignite hydrogen fusion. They fired 192 individual laser beams at the same time delivering a total power of 1.85 megajoules of ultraviolet laser light. That powerful laser light was aimed at a target 2 mm in diameter. 1.85 megajoules doesn’t mean a lot to most of us, but when you break it down to watts that amount of power is staggering.

The single laser shot produced over 500 trillion watts of power. To put that in perspective, the beam was 12,500 times more powerful than the demand for electricity in all of Britain in 2006.

Finally, Researchers Teach Goldfish How to Drive a Car and Avoid Obstacles
Advertisement