Aerographite is the World’s Lightest Material

Scientists from Europe have created what they claim to be the world’s lightest material. The material is called Aerographite and is said to be 75 times lighter than styrofoam. The new material is also electrically conductive, highly compressible, and seriously black in color. The material resembles a cobweb and consists of porous carbon tubes that almost appear smoke-like in the image. 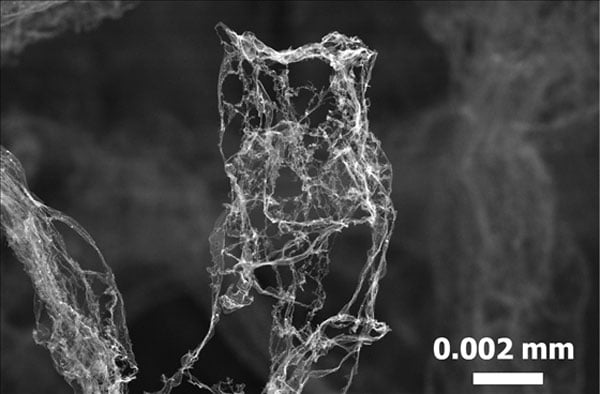 The image above was taken with a scanning electron microscope. The material weighs 0.2 mg per cubic centimeter. That makes the new material four times lighter than the previous record holder called Microlattice, made from nickel. Aerographite can be compressed up to 95% and still spring back to its original form with no damage. Compression up to a certain point actually makes the material more solid and stronger than before.

The material nearly completely absorbs light rays, creating what the scientists say could be called the blackest black. The material was created by starting with a zinc oxide powder heated to 900°C, creating a crystalline structure. Hydrogen is then introduced to react with the oxygen inside the zinc oxide resulting in omission of steam in seeing gas leaning porous carbon tubes behind. The scientists believe that material could be used in electronics for aviation or satellites and possibly for water purification among other uses.