Too Lazy to Brush? Then Chew on a Rolly

Nothing emphasizes a person’s lack of dental hygiene more than bad breath. Too maintain healthy teeth, gums and breath, dentists recommend that people brush their teeth twice a day for at least two minutes. But even then, there are some people in the world who either forget or don’t bother to set aside at least four minutes a day to care for their teeth. Sounds pretty gross, but trust me, people who are like that do exist. (That’s one thing I learned after going to University with some guys who had the worst hygeine habits ever.)

So for all those lazy goons, there’s Rolly. It’s being advertised as a ‘toothbrush on the go’, but they look more like those tiny images of germs that you normally see in ads for products that are trying to get rid of said germs. 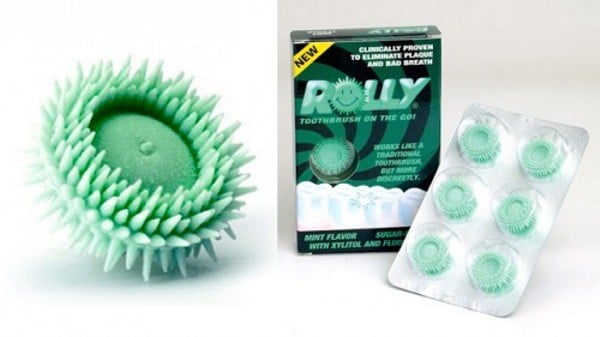 Each rubber disk is covered with about 276 bristles that are coated with Fluoride and Xylitol. So instead of brushing, you can just pop one of these in your mouth and chew, chew, chew!

It wouldn’t be smart to replace your regular toothbrush with these, since the Rollies cost about $15(USD) for a pack of 12. But they’d definitely be great for use when you’re traveling.