TMNT Bra: Heroes in a D-Cup

Girls out there can probably relate to the statement “look me in the eyes” when a guy decides to stare at chest level instead of her face. But now, thanks to the power of the Teenage Mutant Ninja Turtles, you might even want to clarify exactly which eyes you want guys to look at. 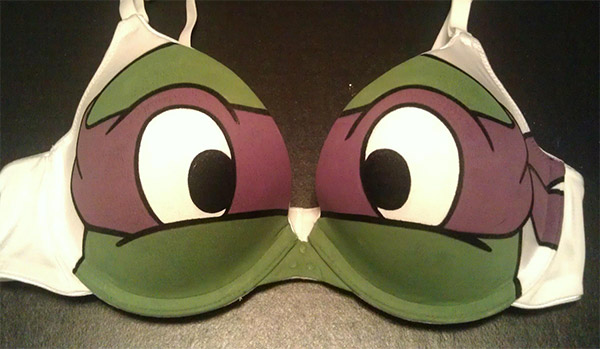 Yep, this bra is done up in to look like TMNT bad boy Raphael, along with his big turtle eyeballs and red non-identity-concealing mask. There’s no doubt if you decide to wear this bra that you’ll be getting stares from your boyfriend or significant other – especially if they’re fans of the classic comic series. And if you dare to wear it as a top, you can be assured that you’ll get all sorts of attention whether you want it or not. Then again, your breasts will now be endowed with mutant ninja powers, so you can defeat any ogling pervs with one quick thwak!

The TMNT bra is available for $35 to $45 (USD) in a variety of sizes from SceeneShoes over on Etsy. And yes, you can choose between Raphael, Donatello, Leonardo or Michaelangelo to cover up your boobs.