71 hours. That’s almost 3 days. That’s how long it takes to sort 65,000 LEGO bricks of varying colors. We know this because one dynamic duo has just accomplished the task. 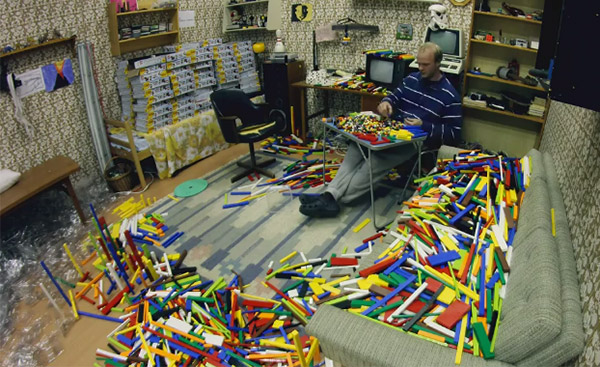 Daniel Larsson and Tomas Redigh (of the Swedish band Rymdreglage) are creating the sequel to their famous stop motion LEGO music video 8-Bit Trip. In preparation for the task, they poured out 100 boxes of LEGO pieces that each contained 650 blocks. They then had two cameras snap a photo every 20 seconds over 71 hours of sorting by color.

The time-lapse video was created using the 12,775 photos that each memory card ended up with when they were done. It’s a pretty impressive feat. I would get way too bored trying to sort out that many LEGO pieces. The 65,000 sorted blocks will be used to make a followup to their first video, to be titled “8-Bit Trip 2″. For now, sit back and enjoy the original: