Bicycle Created from Recycled Cardboard for $9

They told him it was impossible – three engineers that is. Engineers may be smart, but obviously these ones lacked vision. After his wife persuaded him to give it a try, designer Izhar Gafni got to work on a bicycle made out of cardboard, with a cost of less than $9 to manufacture. 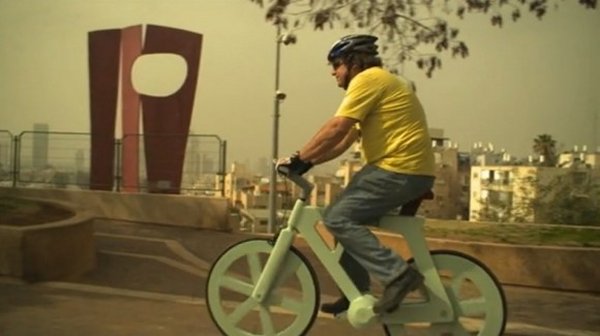 Gafni was inspired by a man who made a canoe out of cardboard, and since he himself had a passion for bicycles and recycling, he wanted to create a functioning cardboard bike. Mission accomplished. Surprisingly, it can even withstand water, humidity, and it’s pretty strong. Gafni had to work through several generations of the design to get it just right. It had to be strong enough to hold a person of up to 300 pounds after all.

Folding the cardboard is what makes it so strong. Its creator compares folding the cardboard to origami. With a total materials cost under $10, Gafni sees much potential here. Assuming the labor costs aren’t prohibitive, stores could sell them to consumers for around $60 depending on what they wanted to add to the bike over and above the original design. The cost is great, especially if it should be stolen, you won’t be out as much money.

[via No Camels via Geek]