Daredevil Leaps from over 96,000 Feet in the Air

We’ve been following the antics of Austrian daredevil Felix Baumgartner for months now. Baumgartner is the daredevil who plans on jumping from over 120,000 feet in the air, setting a world record and becoming the first person to break the speed of sound without an aircraft. Baumgartner has conducted several practice jumps and his latest practice jump came this week. 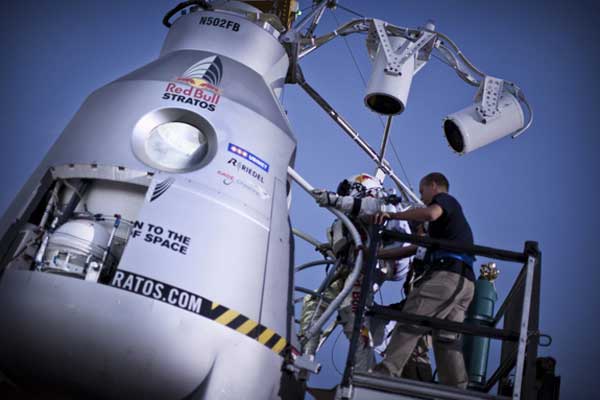 Baumgartner donned his pressure suit and climbed into a special capsule to take a ride to 96,640 feet above southeastern New Mexico. Once at altitude, the daredevil stepped out of the capsule and plummeted towards the ground reaching a top speed of 536 mph. After freefalling for 3 minutes and 48 seconds, Baumgartner opened his parachute.

Baumgartner was safely back on the ground 10 minutes and 30 seconds after jumping from his capsule. He had encountered a few difficulties on previous practice jumps, but there’s no word of any issues with his latest practice jump at this time. Baumgartner hopes to leap from 125,000 feet in the next month or so.