Super Nincoffee Jr.: Have a Nice Cup of Joe & Mac

Most of the console mods we feature are either portable versions of older consoles or add aesthetic features. Rarely do we come across a hack that was made for the heck of it, like this coffeemaker that was transformed into an SNES. Why? Tinkerers do or do not, there is no why. 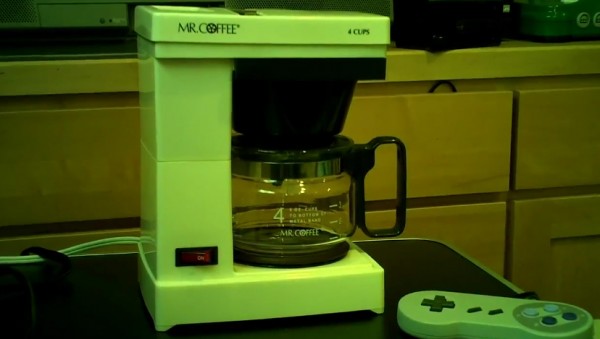 The mod was made by YouTuber Tyler and his dad. This is actually the second Mr. Coffee that they turned into a Mr. Videogame. Neither of the mods work as a coffeemaker anymore – perhaps Tyler can work on that in the future. Tyler also stated in the description of the first Super Nincoffee video that they originally wanted to make a Super Nintoaster but they found it too hard. Tyler, if you still want to get on that project I think you and your dad should check out this video. The rest of you can see the Super Nincoffee Jr. in action below:

Obviously the whole thing could turn out to be fake. Hopefully Tyler and his dad can post a video of the steps involved or at least the electronics inside the mod.