Wikipad is a Tablet for Games, not for Research

Last January Razer showed off its concept for a gaming tablet. As it turns out, there was another gaming tablet that was announced around that time. For some reason it’s called the Wikipad, and not, I don’t know, Gametab. But names aside, it does have potential. 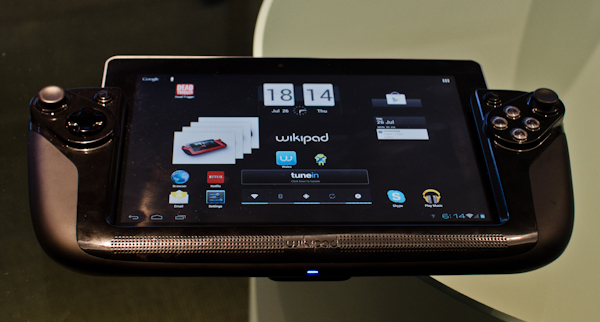 According to VentureBeat, the Wikipad is an Android 4.1 (Jelly Bean) tablet. It will have a 10.1″ 1280 x 800 IPS display, an NVIDIA Tegra 3 T30 1.4GHz quad-core CPU and 1GB 1066Hz DDR2 RAM. Like most tablets it will come in different memory capacities, with the cheapest model having the standard 16GB of storage.

But perhaps the most unique feature of the Wikipad is its detachable controller, which looks like a stretched out Xbox 360 controller. It has two analog sticks, a d-pad, four face buttons and a pair of triggers and bumpers. Note that Razer didn’t mention if the Project Fiona tablet’s controller is detachable. The other hyped up feature of the Wikipad is its glasses-free 3D display, but the first model that will be launched will only have a 2D display.

Wikipad wasn’t able to meet the March release date, and the VentureBeat exclusive made no mention of a price, which could mean that those numbers have changed as well. It would be stupid to assume that Apple isn’t at least considering a gamer-oriented mobile device, but for now it seems like its competitors are trying to come up with such a device. Apple still has hundreds of thousands of trump cards – the wealth of games in the App Store – but who knows what will happen if someone nails the right mix of hardware, software and network capabilities?

[via Wikipad & VentureBeat via Albotas]