If you’re a fan of Angry Birds, and you must absolutely play every available level for the game, you’ll definitely want to check out the new Intel branded version of the popular game on Facebook. In the Intel Angry Birds game, the birds follow those dastardly green pigs inside the brains of an computer. 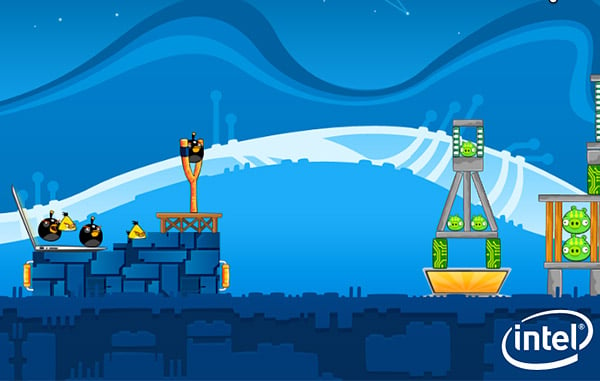 You’ll notice Intel branded backdrop, and the green pigs also have what appear to be circuit etchings on their foreheads and there are various resistors and other parts lying about, and some of the wooden pieces you’re used to seeing in the game have been replaced with green circuit boards in this version. The birds can also be found lounging about on a tiny ultrabook if you look carefully.

Other than the branding and the odd high-tech sound effect, the gameplay mechanics are the same as any other version of Angry Birds on Facebook, though these are brand new levels. Use the mouse to pull the slingshot back and shoot the bird. Birds with special features such as bombs or the ability to speed up need to be clicked to activate. The scoreboards from the game can be shared with other Facebook friends as well. If you’re looking to waste some time, head on over to Facebook and play it now.