EBay Now Gets Your Products to You the Same Day

I think I’m like most people out there in that I like shopping online, but I hate waiting for stuff to show up. Shipping takes too long and more often than not, many places don’t ship the same day you place the order, and express shipping can really add up. eBay has a new iPhone application that has launched in beta called eBay Now. This app takes online shopping to the next level with cheap same-day delivery. 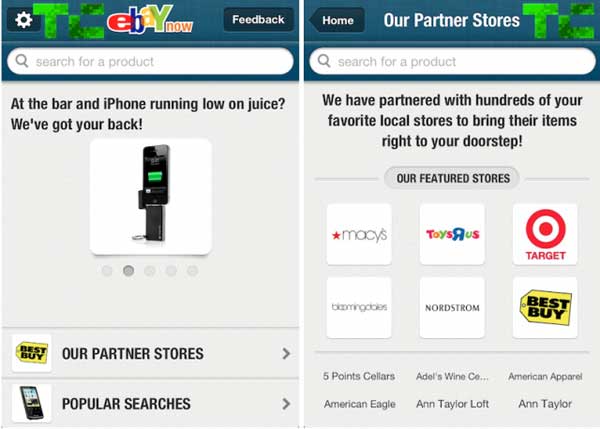 EBay now has six featured stores including Macy’s, Toys “R” Us, Target, Bloomingdales, Nordstrom, and Best Buy. The beta is currently by invitation in the San Francisco area. All stores that are partnered with the app are participating for San Francisco residents between 9 AM to 9 PM Monday through Saturday and from 9 AM to 6 PM on Sundays.

The way the app works is that users go to one of the participating stores, find the product they want, and then pay for it and enter the delivery address. The coolest part is the delivery address can be home, office, or the bar down the street. According to eBay Now, many items will be delivered to you within the hour, and up to 30 minutes from the close of each store. Beta users get $15 off their first eBay Now order and free shipping on their first three orders. After those first three orders, the delivery fee is five dollars, which is still a bargain for same day delivery.