Dancing is fun. Robots are fun. Therefore, robot dance parties should rock the house. There’s nothing better then having a robot show up and dance his metal butt off to the music. It makes everyone smile. Okay, so what if a walking six-speaker sound system robot showed up at your party? It would be awesome right? You know it. 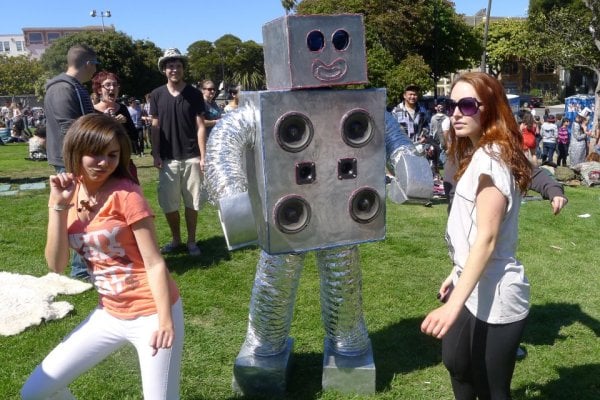 The guy in the costume is Chris. He really loves how people smile and brighten up and dance when he puts on that robot costume with the built-in speakers. He’s a good guy and just wants to spread happiness. And that’s why he has a Kickstarter project to upgrade the costume.

Some of what he wants to do includes: adding arduino hardware that would allow him to synchronize the light patterns with the music, upgrade the sound system, mount a tablet to the side with a music library so fans can pick their own songs, add a karaoke microphone + music selection and electronic sign to scroll lyrics… and so much more.

Robot dance parties are already awesome. Now help Chris knock it out of the park and make his dancing robot even more amazing. The fundraising goal is just $1,500. Right now $28 has been pledged with 18 days to go. Make it happen. Everbody needs more dancing robots.