Live Spider Found in Woman’s Ear: Nightmares for All of You Tonight

Well this is exactly the type of story that is going to burrow deep into my brain tonight and manifest itself in some sort of horrific, vivid nightmare. Apparently a woman living in South-Central China turned up at a hospital with a live spider living in her ear. Eeesh!

She came to the hospital complaining of an itching sensation in her ear, and when the doctor took a look, out peeped a nasty, creepy, crawly arachnid. The spider had been living in her ear for at least three days before she went to the hospital. 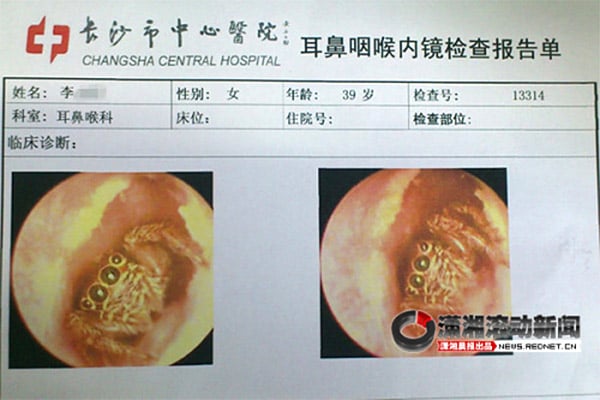 While the doctor considered yanking the spider out of the woman’s ear, there was concern it would only dig in deeper and set up shelter inside her ear canal for the winter. So in a stroke of genius, the doctor poured saline solution into her ear, and the water caused the spider to float out and scurry away.

On a related note, Amazon has plenty of earplugs on sale today.

[via ChinaDaily via M.I.C. Gadget]