We’ve talked about some strange medical conditions over the years here. Most recently, we mentioned the woman who had a live spider living in her ear for several days. Another very strange medical mystery has surfaced with the case of Shanya Isom, who has been visiting doctors around the world in an attempt to figure out what is causing her severe allergic reaction. Isom is having some sort of allergic reaction that is so bizarre that it’s causing fingernails to grow from hair follicles all over her body. 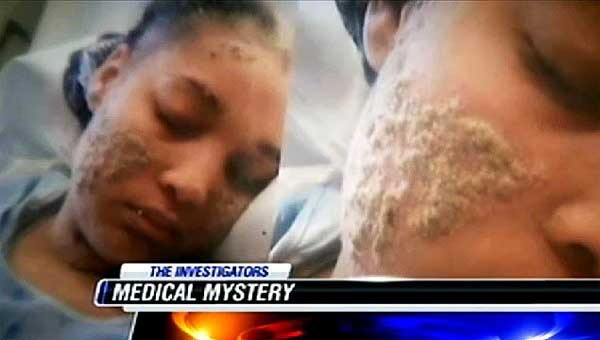 “Black scabs were coming out of her skin,” said her mother, Kathy Gary. “The nails would grow so long and come out and regrow themselves. They are hard to touch and stick you.” The young woman is unable to walk without assistance because of the reaction. Physicians at Johns Hopkins Medical Center in Baltimore where the young woman is being treated told her family that she is the only person in the world they are aware of with this condition.

The disease first surfaced when the woman was in her junior year in college studying criminal justice in 2009. The woman went to the emergency room for an asthma attack and was given a large dose of steroids. Doctors suspect that caused an allergic reaction. She had itching after returning home from getting the steroid shot, and was given Benadryl but the reaction got worse. Doctors remain baffled by the condition.