Remember the 1990’s? It was a crazy time to be a geek. Especially a comic book geek. All of my comics from that period are worthless because of the collecting frenzy of the time, but man did they have some good storylines. Of course the best stuff can also be found in the toy advertisements between the pages. That’s how this story began. 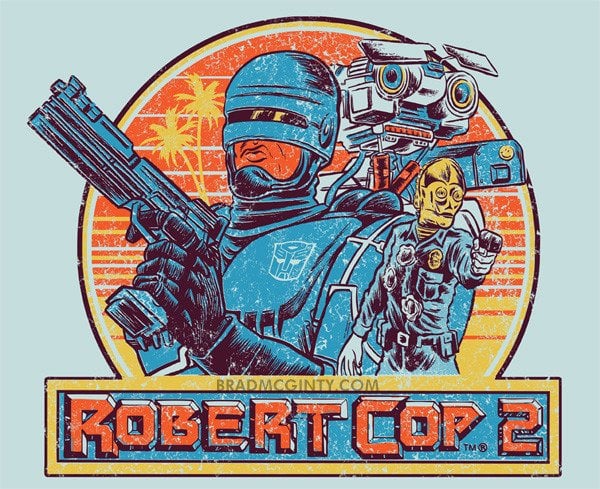 It was the 90’s. Brad McGinty was a 12 year old kid reading through his issue of Heroes Illustrated. Remember those? He came across a tiny picture in one of the columns that a reader had sent in. It was an ad for a bootleg Robocop action figure named Robert Cop. Brad thought that this was pretty awesome and he dreamed about it for years.

And now he has realized his dream and has created this amazingly geeky Robert Cop t-shirt. As Brad puts it, this is a bootleg based on a bootleg. And it really is awesome. It features Robert Cop, C-3PO in a Detroit Metro uniform in the guise of a T-1000 and Johnny frickin 5. NEED! Just $22(USD) at the link below. Thank you, Internet. I love you.