Razer DeathStalker Ultimate Keyboard has an Awesome Name. Oh and an LCD Trackpad

The LCD multi-touch trackpad on Razer’s Blade gaming laptop was just about the only truly unique thing about it. Fortunately that cutting edge device is no longer exclusive to the laptop, because Razer has incorporated it into its latest gaming keyboard. 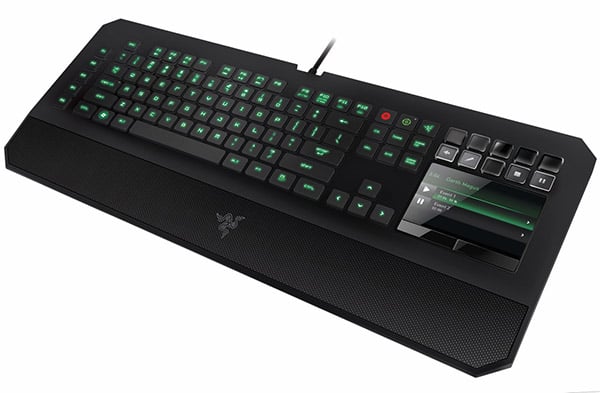 The 4″ trackpad is available on the high end variant of the DeathStalker keyboard, the DeathStalker Ultimate. As with the Blade, the LCD can be used either to display information when you’re gaming or browsing, but it can also be used as a multi-touch trackpad. It also comes with 10 buttons with customizable icons and functions – bind commands, macros and other things that need to be bound.

There are also a variety of apps built-in for use with the trackpad, such as a macro recorder, apps for Gmail, Facebook and Twitter, and two game specific apps, one for Battlefield 3 and one for Star Wars: The Old Republic. That’s kinda sad, but I guess it’s better than nothing.  Razer has also launched a cloud service called Synapse to make it easier for users to save and sync their configurations.

As for the keyboard itself, it has anti-ghosting technology enabling up to 10 simultaneous key presses, chiclet keys with changeable backlighting, a fixed wrist rest, braided fiber cable and a name that absolutely cannot be topped. Unless Razer names its next keyboard the DeathDeader. The DeathStalker Ultimate will be available on Razer’s online store in September and will be sold for $250 (USD).