Hoax Gone Bad: Man in Bigfoot Suit Gets Run Over

This story should serve as a warning to all the fun-loving pranksters out there. While I have nothing against pranks, I do think it’s not a very wise thing to take things too far. 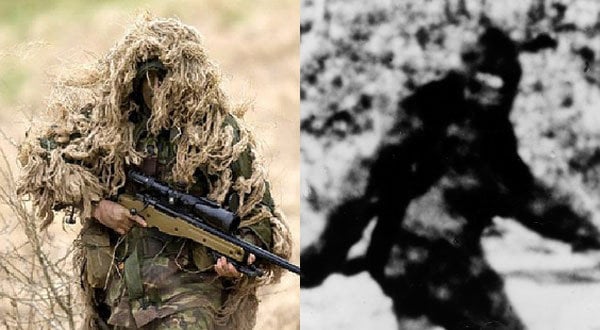 The image above is actually of a soldier in a Ghillie suit. While some think that the suits make people look like Bigfoot, I certainly don’t, but maybe that opinion might change when it’s dark out.

Anyway, a Montana jokester named Randy Lee Tenley donned a Ghillie suit recently so he can scare up some people by pretending to be Bigfoot. He allegedly darted out into the middle of the road (while roaring, I bet) – but his prank went horribly wrong when two cars hit him in the darkness of the night.

Montana Highway Patrol Lt. Col. Butch Huseby told the Los Angeles Times: “What we know so far is that we had a couple of guys out, allegedly trying to prompt a sighting of Bigfoot. This is one of the dumbest things I’ve ever seen. Really.”

The incident is still under investigation though. And while our sympathies go out to Tenley’s family, let’s hope future pranksters will take this as a warning sign and not take the jokes too far.