This is one piece of ‘gum’ that’s going to be allowed in Singapore. As you might already know, the country is famous for its many rules to keep the country clean and orderly. The ‘no gum’ rule is just one of those, but the Chewing Gum Battery is exempt from that.

That’s because this concept isn’t really chewing gum. Each pack actually contains sticks of paper batteries that can give your devices a boost when it’s running low on power. The packs of batteries would actually be kept charged at solar-powered dispensing stations so you can just go and grab a couple of sticks when you need them. 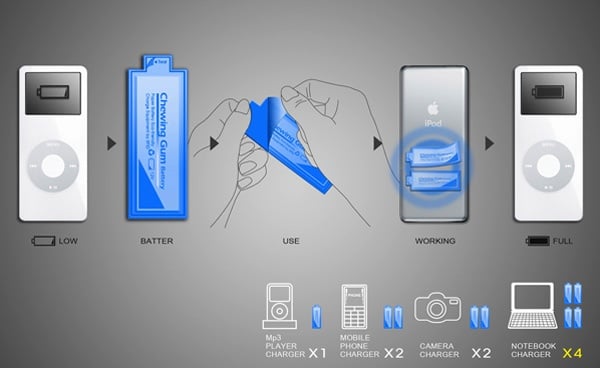 It looks and sounds like an interesting and promising concept, but you have to wonder, if it’s even possible to make batteries this thin. One company already has developed Li-Po batteries as slim as 0.5mm so it might not be that far-fetched. The Chewing Gum Battery Concept was designed by Ping-Yi Li and is a 2012 iF Design Talents entry.