Four-Barrel Gun for When Your Target Doesn’t Really Matter

Firing off 12 rounds in a row at the same target doesn’t do you any good if you’ve got crappy aim. To be sure you hit SOMETHING, you’ll want this gun instead. 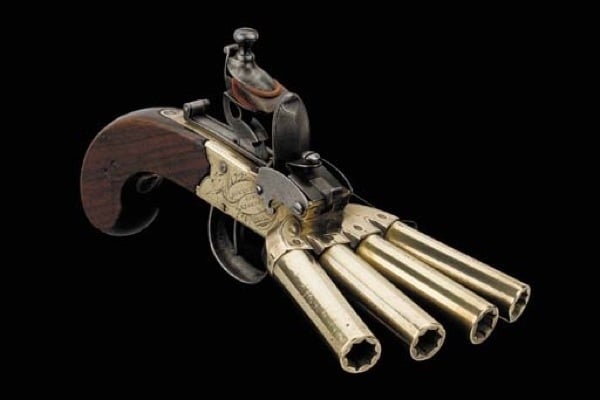 What you’re looking at is a rare old 56-Bore Four-Barrel Flintlock Box-Lock “Duck’s Foot” pistol, dated back to 1810. Now, I’ve heard of a four-barrel carburetor, but never a four-barrel pistol.

Apparently, pulling a single trigger on this weapon would fire four projectiles simultaneously, taking down targets at a variety of angles at the same time. I can only imagine the recoil on this thing was insane, pushing exploded gunpowder residue in four directions at once. And aiming at anything with this must have been a complete crapshoot – but if you had one of these, accuracy was probably not your primary objective. Oh, and I’d have to guess you couldn’t fit this in a standard holster.