I’ve seen some impressive projection screens in the past, but I can honestly say this is the first time I’ve seen a screen that’s made up of thousands of moving styrofoam cubes. 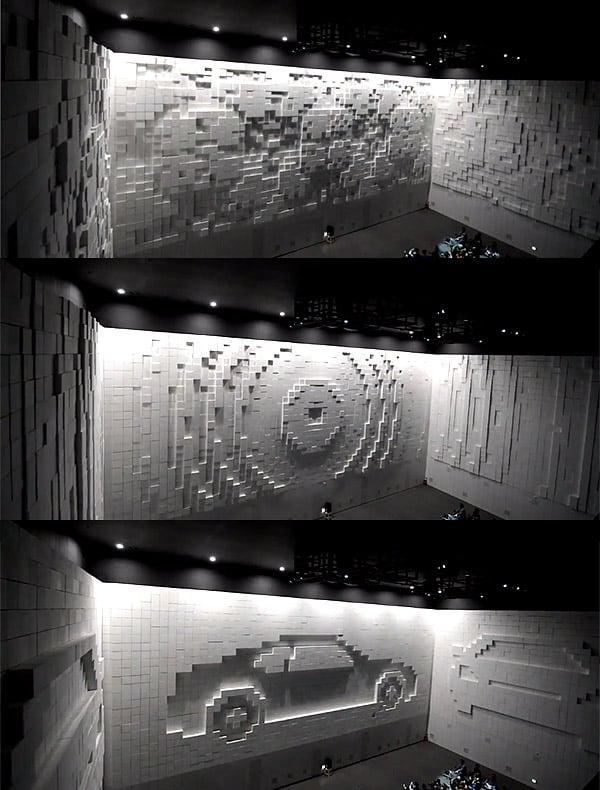 The Hyper-Matrix Cube Wall was created by Korean interactive collective JônPaSang for an installation for the Hyundai Motor Group. It’s a massive grid of mechanised white 30cm x 30cm (appx. 1 foot x 1 foot) cubes which can move in and out to form images. Overall, the wrap-around display measures a whopping 45 meters (~148 feet) wide by 8 meters (~26 feet) high. According to my math, that means there’s about 3848 cubes.

As you can see from this video from the guys over at Mechatronics, it’s quite an incredible display:

Nifty. But where’s the projection, you ask? Well, since the Mechatronics guys were most interested in showing us the mechanical aspects of the rig, they cut off the presentation right before the projection portion. Here’s another clip which shows off the entire show:

Pretty cool, no? That part with an individual image on each cube is pretty sweet. Though there appears to be a single cube on the left wall of the screen that’s stuck in that second clip. It’s really bugging me, and if I have to know about it, so do you. If you want to know how this massive installation was built, here’s one more video clip for you to watch:

I’d love to see them do more projection mapping type effects on the screen. I can only imagine the cool pixel art shows one could do with all of those blocks. I’m up for a giant game of Super Mario Bros… or even Pong.