I always loved playing with my Spirograph when I was a little kid. Of course, now with tablet and computer painting apps, it’s hard to imagine going back to such a simple creative plaything. But sometimes, simplicity is fun too. One graffiti artist still loves his Spirograph, and it inspired him to make a giant one. 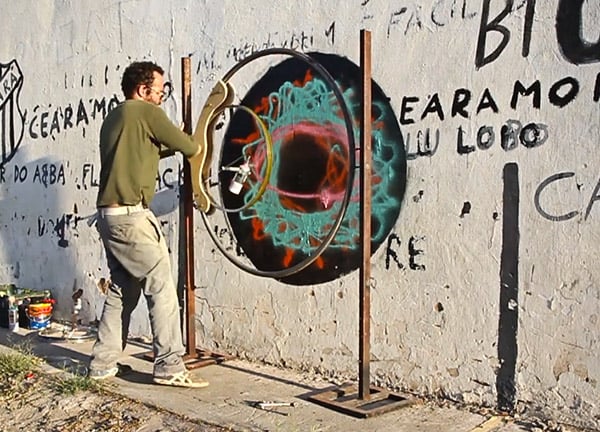 Using the basic principles behind the original Spirograph, street artist Narcélio Grud bent a large metal rod into a circle, and then attached a rig which allows a set of smaller wheels (made from bicycles) to spin around on the inside and holds the spray can button down. As he turns the wheel, a rotating geometric pattern appears, just like with the original Spirograph toy. Adjusting a couple of bolts that hold the spray can let him create a virtually infinite number of patterns. Here, check it out in action:

While the effect isn’t as precise as using a pen and paper, it’s still a cool idea, and I’d love to see someone make a motorized version of this thing sometime.

[via Rebelart via Nerdcore (DE)]