Two of the most well-received games this year are both sequels, which were also released within a few days of each other: Torchlight II and Borderlands 2. It turns out these two games shared more than just a launch week, they also shared a robot: 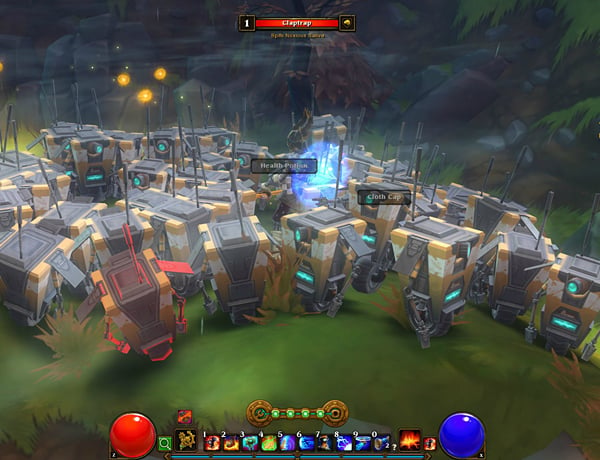 Yep, that’s CL4P-TP aka Claptrap. Actually that’s a lot of Claptraps. Redditor anti087 was messing around with Torchlight II’s console commands when he discovered that he could summon the robot from Borderlands 2. According to several Redditors, to summon a unit in Torchlight II, all you have to do is bring up the console and type “unit monstername, x” or “monster monstername, x”, where monstername is the name of whatever it is you want to summon and x is the number of units of that monster that you want to appear. For example, if you want to summon one Claptrap, you can type in “unit claptrap,1” or “monster claptrap,1” (minus the quotes).

But why can you summon a Claptrap unit in Torchlight II?  Because he’s actually in the game as an Easter egg! Here’s proof from YouTuber pronstorestiffi:

Did he just give away his nut? Gross.