Helping people who can’t walk walk again is an admirable goal, and that’s what the Kinect Kinetic Orthosis is supposed to do. It’s specifically designed for people suffering from neurological disorders that affect the strength of their legs. 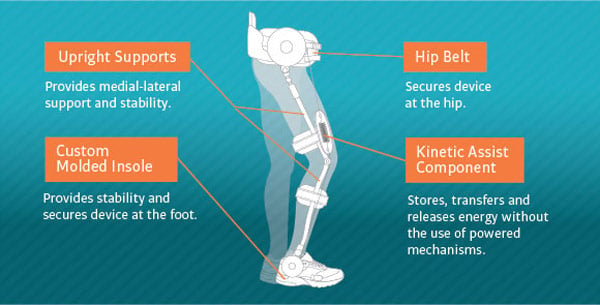 The Kickstart Kinetic Orthosis from Cadence Biomedical will store kinetic energy from the legs and dispense it to propel the foot forward during the extension phase of locomotion. It was inspired by horses, whose long tendons span multiple joints and allow for a highly efficient walking and running. It’s not bulky nor does it have heavy batteries, giving its users more freedom.

It’s aimed at people who suffered from strokes, incomplete spinal cord injuries, ALS, muscular dystrophy and multiple sclerosis. Cadence is currently conducting clinical studies aimed at quantifying Kickstart’s benefits and will report this data in 2013. There’s no word yet when it will be available.