If you have $16,000 lying around and I hankering to virtually cruise the halls of some distant office, Suitable Technologies has something suitable that it has just debuted. The company has new telepresence robot called the Beam Remote Presence System or Beam RPS.

The robot requires three components, the robotic device itself, the client software, and the Beam Docking Station. The docking station is where the remote user parks the robot to recharge. The bot stands 62-inches tall and weighs 95 pounds. It has a 17-inch screen that shows the operator’s life-sized face to be displayed – assuming your head will fit on a 17-inch screen. 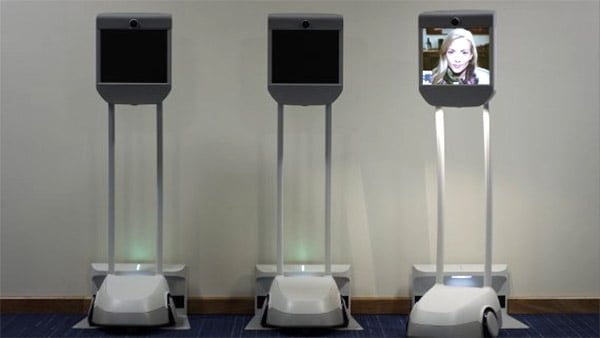 The Beam’s internal rechargeable battery is a good for up to eight hours of use and the robot can cruise around at 1.5 m/s. The robot has an integrated wireless radios for control and has a pair of HD cameras providing a 170° field of view vertically and horizontally. The robot also has a microphone array with six microphone beams to eliminate background noise and echo. It also has an integrated speaker system with LED lamps for lowlight operation.

With much cheaper options coming in a few months, and others coming soon, I’m not sure of the market for a $16,000 telepresence ‘bot, but it’s just more evidence that with time we’re going to start seeing robots roaming the halls sooner rather than later.