Wicked Lasers is a company that makes a lot of crazy bright laser pointers. In fact, some of these things you shouldn’t even call laser “pointers” because they can actually set things on fire and pop balloons – they’re more like laser weapons. The company also makes an insanely powerful flashlight that can burn paper. 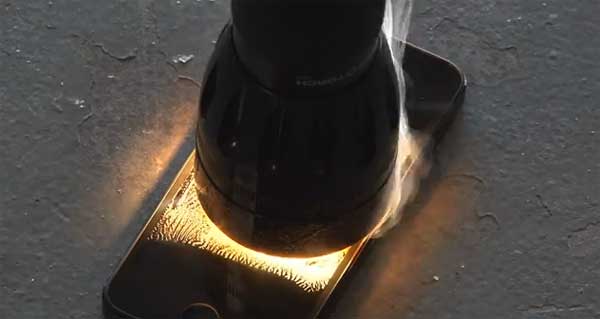 In keeping with the Internet tradition of destroying every new Apple gadget to hit the market in creative new ways, Wicked Lasers trained five of its 1.25W Spyder III Arctic laser pointers at the same point on iPhone 5 and then turned them all on. The lasers damaged the screen and caused a bit of smoke to waft from the smartphone. However, after the lasers were turned off the iPhone 5 still functioned even though the screen was damaged pretty badly.

Wicked Lasers then turned to its crazy bright Flash Torch to finish off the iPhone 5. The flashlight ultimately killed the innocent iPhone 5 as smoke quickly began to boil out from under the flashlight when it was placed on the surface of the phone.