How many times have you been at the airport and waited what seemed like an eternity for your bags to show up. Oftentimes, this is due to the long, slow process of unloading bags from the gate and driving them all the way to the baggage claim area. This new baggage conveyor system hopes to speed up that ponderous system and make it more efficient. 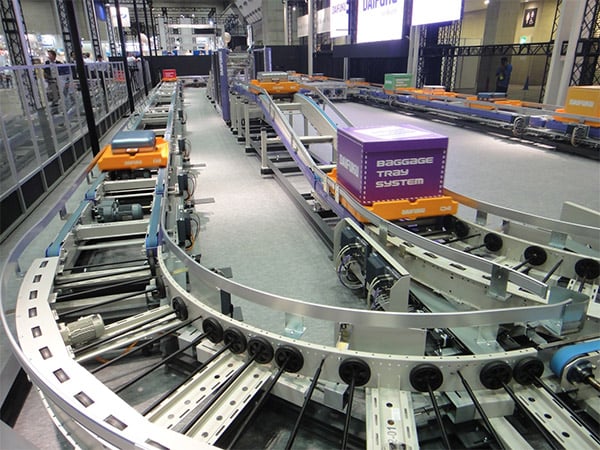 Daifuku’s Baggage Tray System can move bags at speeds up to 600 meters-per-minute. To put that in perspective, that’s a speedy 22 miles per hour. Sure, Usain Bolt can run faster, but probably not with a bag strapped to his back (though the Cheetah robot might be able to.) Anyhow, here’s a video of the system in action, showing off just how fast it truly is.

I certainly wouldn’t want to try and catch up to a bag moving around on the fast straightaway right behind the guy in the video.

The baggage trays in the conveyor have RFID tags on them so their location can be monitored, as well as the position of each individual bag placed on the trays. Daifuku also offers equipment to automatically load and unload the conveyor. In addition to being useful for airports, this system could be very handy for moving parts around quickly in large manufacturing operations.