Asteroid Dust Cloud Could Be Used to Fix Global Warming

A group of scientists from Scotland have an insane idea to help reverse the effects of global warming here on Earth. The scientists think they can grab a near-Earth asteroid called 1036 Ganymed and use it to him to create a massive dust cloud to block some of the Sun’s energy from warming the Earth. The scientists say that they only need to reduce 1.7% of the solar radiation that hits the Earth to offset a global temperature increase of 3.6°F. 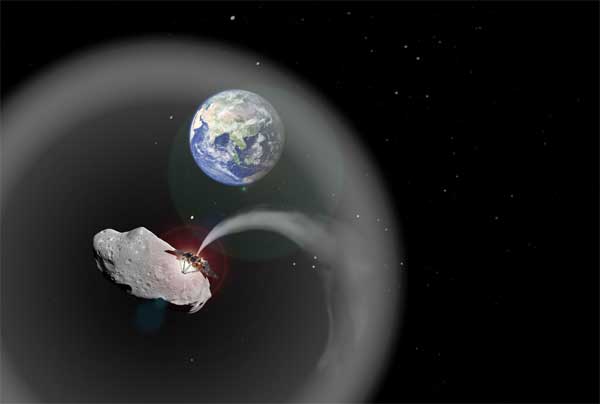 The plan is rather far-out, and even the scientists admit that it’s no replacement for curbing greenhouse gas emissions here on Earth. The scientists envision using some sort of “mass driver” that can be used to push the asteroid to Lagrange point L1. Lagrange point L1 is where gravity from the Sun and the Earth cancel each other out.

Once there, the mass driver could then be used to blow a massive cloud of dust and debris off the asteroid to block sunlight. The dust cloud would need a mass of about 11 million-billion pounds and span about 1600 miles wide. I wonder if a slight miscalculation in the size of the dust cloud might block more sun than they intend and plunge the Earth into an Ice Age.