Apigy made waves last year when they released the Lockitron, a door lock system that was remotely operated via phones. They’ve recently unveiled a significantly improved version of the device, adding tons of new features at a much lower price. That said, it still works as before, i.e. it turns your phone into both a house guard and a security risk. 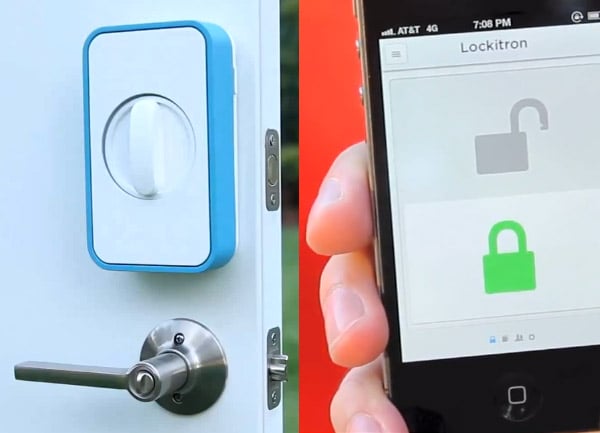 The first version of the Lockitron was a full deadbolt lock that connected to the Internet via Ethernet. The newer version is much more practical because it no longer comes with its own lock – it attaches to existing deadbolt locks – and it has Wi-Fi connectivity as well. The old Lockitron also supported automatic opening via NFC, but the newer version now uses Bluetooth 4.0 to detect your phone and automatically unlock the door.

The new Lockitron is also more talkative. It sends notifications if your door was unlocked, if its battery is low and, thanks to a sensor, can even tell you if someone’s at the door – as long as they knock, that is. All of the other features are still present in the new device. In terms of security, the signal that the Lockitron app sends is encrypted and you can also remotely disable the app should your phone be lost or stolen.

You can reserve a Lockitron from its official website for $149 (USD). Apigy ran its own fundraiser and has surpassed its target amount, which bodes well for the product.  That said, the device has garnered a considerable amount of negative feedback from YouTube commenters for obvious reasons. But if you think about it, a regular deadbolt is no more or less secure than this device, especially since it’s now just basically a smart mechanism that moves the lock and not the lock itself. You can still use your key if you want or need to and you can use the remote disable feature if you lose your phone.