Quadrocopters Programmed to Throw and Catch Balls, Still Working on Swinging a Bat

In the future, when quadcopters develop a hive mind and eventually come after us with their machine guns and tasers, they’ll be able to rub salt in our lethal wounds by playing catch with our heads, thanks to a project by researchers from the Swiss Federal Institute of Technology. 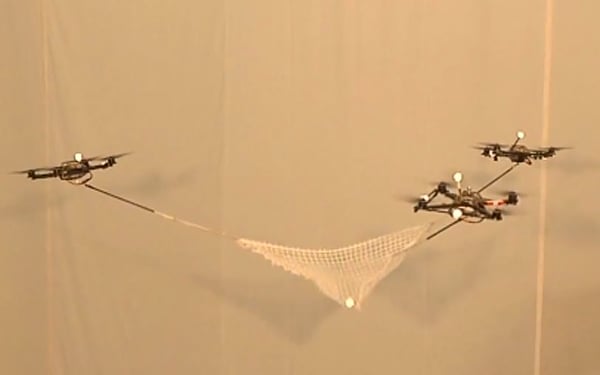 As you can see, we can still laugh at the silly robots because it takes three of them plus a net to throw and catch a ball. That said, these playful guys not only believe in teamwork, they’re also smart and quick on their rotors. They use a trajectory algorithm to calculate the path of a ball in real time as it is thrown to them. They can also learn by trial and error and improve their aim and they can quickly stabilize after every maneuver to avoid slicing each other to pieces and ensure that the net is at the right position.

I guess this means that in the future you won’t be able commit suicide by jumping from a high place anymore.