Parallella Aims to Bring Supercomputing to the Masses

Over the last few years, we haven’t seen the kind of gains in computing speed that one might expect if you’re strictly following Moore’s Law. We’re beginning to run into limits on the frequency of any single CPU or GPU, and one of the modern ways to get past this limitation is through the use of parallel computing architectures.

However, programming for parallel chips hasn’t been an easy transition for traditional programmers, and the technology has largely remained the domain of high-end engineering projects. However, one company is pushing an initiative to bring parallel computing to everyone. 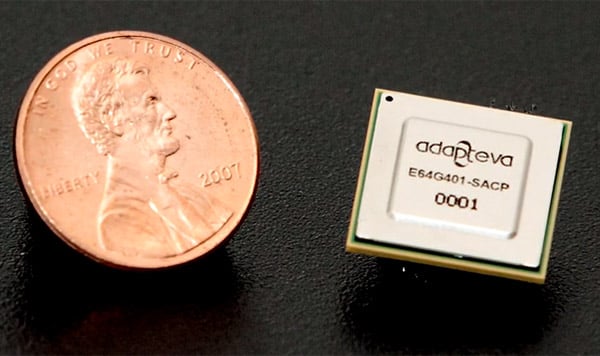 Adapteva has been producing multicore chips with 16 cores for a little over a year now, and is now testing a 64-core chip. The plan now is to produce a low-cost parallel processing kit for as little as $99. The hope is by providing fully open source hardware and software, development for and adoption of parallel processing would increase dramatically. As this takes hold, the plan is to launch a computing platform called “Parallella.” According to Adapteva: “Once completed, the Parallella computer should deliver up to 45 GHz of equivalent CPU performance on a board the size of a credit card while consuming only 5 Watts under typical work loads. Counting GHz, this is more horsepower than a high end server costing thousands of dollars and consuming 400W.”

By launching its first kits on Kickstarter, the company aims to drive production costs down dramatically, and in exchange will open source the chipset as well as all documentation and software. The $99 kit will put an Epiphany-III based Parallella board in your hands, including a dual-core ARM A9 CPU, as well as 16 Epiphany cores on board and development software.

A pledge of $199 or more will get you the upcoming 64-core Epiphany-IV board – if the project is able to reach a stretch goal of $3 million. With 17 days left to go, the project has raised nearly $300,000 of its $750,000 goal, so there’s a way to go. If you’re into tinkering with the latest in technology, and want to see what you can do with an extremely powerful chip, then you might want to get in on the project and pledge.