Update 10/14/2012: Now that the Red Bull Stratos is complete, you can view an archived copy of the jump below…

If you’re paying attention to daredevil Felix Baumgartner and his desire to jump out of a pressurized capsule 23 miles above the surface, you may have noticed that he didn’t make the didn’t make the jump earlier this week. Winds were too high early Monday morning when Baumgartner had planned to make his leap. The skydive has now been rescheduled for Sunday. 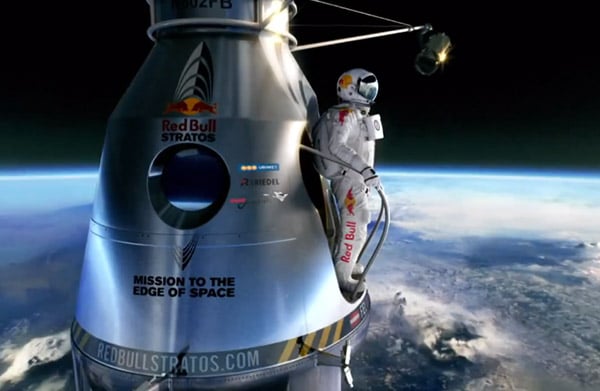 If you somehow missed all the talk about Baumgartner and his insane desire to jump from an altitude of 120,000 feet, I’ll run it down for you again. Baumgartner plans to take the world’s largest helium-filled balloon attached to pressurized capsule on a two-hour trip straight up. He will then depressurize the capsule, and open the door.

I can only assume there’ll be some significant sphincter puckering and shortly thereafter, he will jump. Plummeting through the thin atmosphere at the insanely high altitude, Baumgartner and his team expect that he’ll be able to break the sound barrier using his body only reaching a speed of roughly 690 mph. Luckily for us, Baumgartner will be wearing a specialized pressure suit that offers five cameras to track his progress.